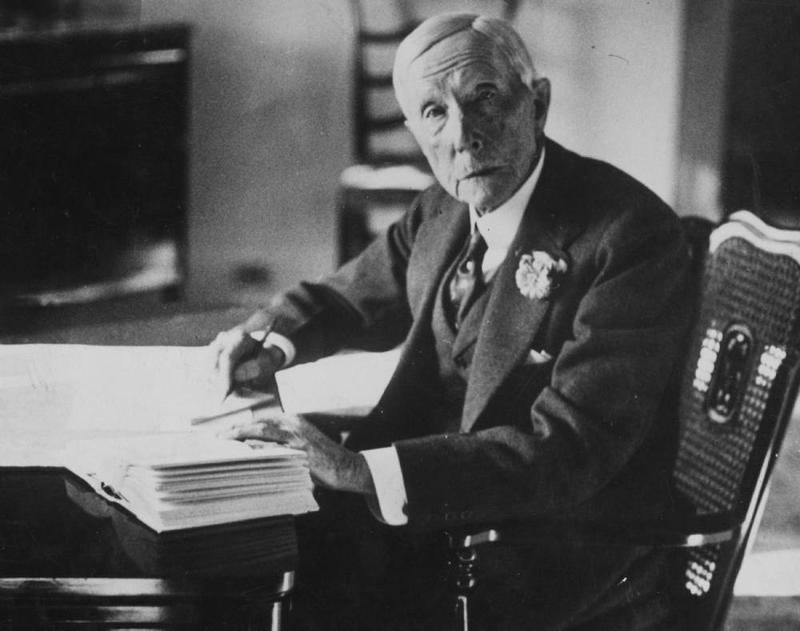 I recently read Titan: The Life of John D. Rockefeller. I highly recommend it! It’s an enjoyable read of a driven and complicated personality.

Rockefeller was a careful, meticulous thinker who would turn into an unstoppable projectile once he had conviction. For example, in 1886 Standard Oil is confronted with the opportunity to buy what was considered “junk” oil in Ohio. The oil was far cheaper but produced an insufferable odor. Rockefeller immediately recruits a top scientist and instructs him to remove the odor. Simultaneously, he lobbies to buy all of the “junk” fields in Ohio and Indiana before he knows he can remove the odor. The board refuses the aggressive move. Surely we should wait until we know we can actually sell the product, right? No. Rockefeller commands a rhetoric that makes Elon Musk seem timid:

At one board meeting, after Rockefeller made his standard pitch for a Lima [Ohio] investment, Pratt lost his temper, threw back his head in agitation, and shouted “No!” Whereupon Rockefeller replied coolly, “I will build this improvement out of my own funds and underwrite it for two years.” He astonished his colleagues by pledging $3 million—about $47 million in 1996 dollars. “At the end of that time if it is a success the company can reimburse me. If it is a failure, I will take the loss.” Whether impressed by Rockefeller’s unflinching resolve or realizing that he had lost, Pratt capitulated. “If that’s the way you feel about it, we’ll go it together,” he replied. “I guess I can take the risk if you can.”

I think his extreme personal frugality helped him have a non-emotional relationship with money. This enabled him to place aggressive bets and broaden his empire. Below are some other highlights I enjoyed in the book.
His father (“Devil Bill”) has him pay rent after Rockefeller builds the house himself.

By one account, a dispute arose as to whether John would pay rent at the new house. He presumably felt that, having built the structure, he had earned the right to occupy it free of rent, but Devil Bill laid down his own arbitrary rules and overrode Eliza’s protests. “You bought your time, didn’t you?” he told John. “What you’re getting now is your own, ain’t it? Well, you have to pay me board.” Once again, one marvels at Bill’s barefaced cheek no less than his son’s fortitude in the face of repeated provocations.

On time management and work-life balance:

He scrutinized his daily activities and regulated his desires, hoping to banish spontaneity and unpredictability from his life. Whenever his ambition was about to devour him, his conscience urged restraint. Since he worked a long day at Hewitt and Tuttle, business threatened to become an overwhelming compulsion.
Starting work each day at 6:30 A.M., he brought a box lunch to the office and often returned after dinner, staying late.
One day he decided to throttle this obsession. “I have this day covenanted with myself not to be seen in [the office] after 10 o’clock P.M. within 30 days,” he wrote to himself. It is telling that the young man made such a pledge to himself and equally revealing that he found it impossible to obey.

Scarcely dreaming that oil would ever supersede their main commodity business, they considered it “a little side issue, we retaining our interest in our business as produce commission merchants.”

He once asked rhetorically, “Do not many of us who fail to achieve big things . . . fail because we lack concentration—the art of concentrating the mind on the thing to be done at the proper time and to the exclusion of everything else?”

“He could not understand why anyone would eat a piece of candy, if that piece of candy were not good for him, just because that person liked candy,” Junior explained.
Once, in an uncharacteristic moment, he had a craving for ice cream and humbly asked Dr. Moeller for a waiver from his prohibition against eating it. “If I had a license from you to eat a very little ice cream occasionally it would be a special dispensation which I would much appreciate, but, you are the Doctor,” he said meekly.

Later on, when Rockefeller asked what the society did with the [$100,00 donation], Gates said it went into a bank account that paid no interest.
This so mortified Rockefeller’s sense of thrift that he borrowed back the $100,000 and paid the society 6 percent. “I can’t endure to see that money idle,” Rockefeller told Gates. “I feel about it as one does to come into a room, ill swept, with the corners full of cobwebs and dust. I want to clean up that room.”

Saving the US economy in a bathrobe:

As panic overtook Wall Street in late October 1907, throngs of petrified depositors lined up in front of banks to empty their accounts [...]
When Gates got wind of the Knickerbocker’s collapse, he telephoned Rockefeller at Pocantico in the early morning and said a public statement from him might restore confidence.
Rockefeller stood there in his bathrobe, mulling over the matter, then decided to call Melville E. Stone, general manager of the Associated Press. He told Stone, for quotation, that the country’s credit was sound and that, if necessary, he would give half of all he possessed to maintain America’s credit. It was an unprecedented statement: A single citizen had promised to bail out Wall Street. The next morning, as these sedative words were reprinted across America, reporters spilled onto the golf course at Pocantico.
When asked if he would really give half his securities to stop the panic, Rockefeller replied, “Yes, and I have cords of them, gentlemen, cords of them.”